My website has moved to www.joannamichalhoyt.com  Hope to see you there!
at March 20, 2018 No comments:

My new book on immigration explores an old American debate 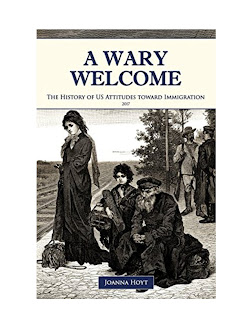 My book “A Wary Welcome: The History of US Attitudes toward Immigration” is now available for sale.
Americans are in the midst of yet another acrimonious debate over immigration. Often the debate sounds more like a shouting match than a dialogue, as each side states its case more and more loudly.  The two sides characterize immigrants in different ways. Some describe legally recognized refugees and undocumented asylum seekers as families fleeing violence or starvation, in need of a safe haven and ready to share their gifts of skill, character, courage and cultural perspective with the country which gives them refuge.  Others describe them as alien hordes who do not understand our culture or our values, who are likely to become public charges at the expense of already-struggling native-born citizens, and who include large numbers of criminals and terrorists.
Both sides claim that they seek to protect American values, but disagree deeply about what these values are.  Some describe the US as a nation of immigrants and of principles, a nation profoundly committed to human rights. Others describe the US as a nation of people of European descent and of laws, a nation profoundly committed to the preservation of its traditional institutions.  An outside observer could be forgiven for thinking that the different sides are describing different countries.
This debate isn’t new. This country was settled by successive waves of immigrants. As each group established itself, it began to wonder about newcomers.  I recently read an essay by a prominent clergyman arguing that the US was being invaded by overwhelming numbers of immigrants from countries with no history of democratic self-governance, with a strong history of terrorism, and with deep ties to a violent and barbaric religious law fundamentally incompatible with US law. The arguments sounded eerily similar to what I hear now from people upset about Muslim immigrants, but the piece was written in 1888 and the alien hordes were Irish Catholics.
I researched and wrote this book trying to understand the history of America’s mixed messages to and about immigrants.  The opening chapters give a basic historical overview of the three main flows of immigrants in to the US—across the Atlantic, the Pacific, and the Southern border. Later chapters look at how immigration affects and is affected by our views of race, labor and economic justice, national security, religion, and the old and thorny question of what it means to be an American. 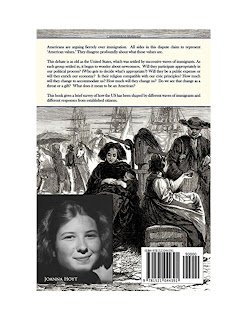 country for generations--many of them arriving before the country was formed--I've been blessed by friendships with immigrants and refugees, and I sometimes struggle to understand the fears of nativists. But in this book I've tried to understand the concerns driving both sides of the discussion.


Researching and writing it gave me a richer perspective on the debate happening now—and some qualified hope that we may work through this time of fear and division, as we have done through earlier panics. I hope that this perspective may offer something of value to readers.
at April 16, 2017 No comments:

Links to my essays online:

Here are a few of my favorite essays that are available free online. I’ve tried to sort them out by topic—this may or may not have succeeded, as I find it much easier to come up with ideas than to sort them.

I’ve always had a slightly unusual view of the world and my place in it. Sometimes I think this reflects salutary insights on my part and faithful following of God’s direction. Sometimes it reflects my own distorted thinking and excessive anxiety. I wrote about both in  “Leadings and Anxiety,” published in the Quaker periodical Friends Journal in 2014,  https://www.friendsjournal.org/leadings-anxiety/

In the process of learning to cope with my own idiosyncratic irrational fears, I learned something about how to understand and maybe work toward healing those irrational fears which are current in our culture.
“Freedom from Fear,” published by The Mindful Word in 2013, looks at that.
https://www.themindfulword.org/2013/sustainable-farm-community-fear/

“Talking with Those People: Constructive Conversations on Controversial Issues,” published on Off The Grid News in 2013, offers suggestions for bridging divides.  It hasn’t gotten any easier since then—or any less necessary.
http://www.offthegridnews.com/misc/talking-to-those-people-constructive-conversations-on-controversial-issues/

Screen-Time and How We Think:

I’m still trying to understand how our fascination with glowing screens enriches and impoverishes our lives. I don’t know the answers, but I think there are important questions we often don’t take time to ask. Two views of this are online. “Connected?”, published on Uisio in April 2016, comes at the question from the perspective of personal and social health:
http://www.uisio.com/connected/
“Screen-Free Week and the Still Small Voice,” published on the Sojourners blog in April 2013, comes at it from a faith persepctive.
https://sojo.net/articles/screen-free-week-and-still-small-voice

I read Les Miserables when I was a teenager learning French. I found it fascinating. I read it again in my thirties, after living and working in a Catholic Worker community where questions of poverty and justice were painfully immediate. I saw the questions-and a lot of semi-satisfactory answers—thrown into painful relief by the story. (The real story, that is, NOT the sugar-watered musical version.) My piece about that appeared on Uisio in February 2016:
http://www.uisio.com/misery-mercy-and-justice-the-unresolved-questions-posed-by-les-miserables/

I went through pretty much the same process with King Lear.  The results of that went up on the Christian Shakespeare blog in summer 2016 as “Show The Heavens More Just:”
http://christianshakespeare.blogspot.com/2016/06/show-heavens-more-just.html

And a lighter-hearted traipse through Shakespeare and religion followed soon after, on the same site, in Antigonus and the Bear: A Cautionary Reflection on the Power of Prayer.
http://christianshakespeare.blogspot.com/2016/06/antigonus-and-bear-cautionary.html

...I thought I would have another section on self-directed learning, but the free-to-read places that published my articles on that subject have gone offline. I do have a book on the process of learning things by doing them, rather than paying experts for instruction, up on Amazon. N.B. This was a work for hire and I am not responsible the cover, the subtitle or the introductory sales pitch. As this site shows, I am not very good at sales pitches and might have done worse. But despite the cover this book is not particularly about learning bodybuilding. I’m not sure what the idea was there.

Links to my published stories:

You can read these free online:

Passage, a flash-fiction dream or nightmare, was published in Paper Butterfly Fiction in April 2017. Read it here:  https://paperbutterflyflash.wordpress.com/2017/04/01/joanna-michal-hoyt-passage/

Tell It Slant, a speculative flash piece about a pair of storytellers in an insurgency, was published in Crossed Genres in March 2014. Read it here: http://crossedgenres.com/magazine/015-tell-it-slant/

The Way Out, a flash piece about kids, distress and imagination, was published in Forge Journal in October 2013. Read it here: http://forgejournal.com/forge/2013/10/03/the-way-out/

The Glass Hill, a flash fantasy piece about a rather unusual escape from bullying (and the dangers therein), appeared in Plasma Frequency in 2012. Read it here: http://www.plasmafrequencymag.com/Issue3/I3S9_Hoyt.html

The Wood-Maiden, a longer story about development and first contact loosely based on the Polish folktale with the same title, was published in the summer 2012 issue of Rose Red Review. Read it here: http://roseredreview.org/2012-summer-the-wood-maiden-joanna-hoyt/

Salt, a longer fable loosely based on the Grimm tale The Goose-Girl at the Well, was published in Scheherezade’s Bequest in December 2011. Read it here: http://www.cabinetdesfees.com/2011/salt-by-joanna-hoyt/

You can read these too if you buy the books or magazines where they appeared:

The Uses of Disenchantment, an offtake on the tale of Jorinda and Joringel, was published in Spring Song Press's Still Waters anthology in winter 2017.

Stairs to the Sky, the history of an unusual artifact--or possibly of belief--appeared in Holdfast Magazine's summer 2017 anthology. [Currently unavailable--sorry]

The Usual Price, a peculiar fairy tale about the costs and benefits of wishing to appear heroic, was published in Flame Tree Publishing's anthology Heroic Fantasy Short Stories in summer 2017

Humanity, a soft science fiction fable about the dangers of dehumanization, was published in Mythic in December 2016. Buy a copy of the magazine here: http://www.mythicmag.com/p/issues.html

Another Man’s Cure, a fable or farce about expert knowledge, desire and contempt,  was published in Pole to Pole Publishing’s In A Cat’s Eye anthology in October 2016.  Buy the anthology here: http://poletopolepublishing.com/books/in-a-cats-eye/

We Have Met The Enemy,  a dark political fable set in the US under a then-imaginary Trump presidency,  was published in the ebook It’s All Trumped Up in October 2016. Preview/buy the anthology here: http://www.itsalltrumpedup.com

Cracked Reflections, a historical magic realism piece about fear, personal and political, and what frees us from it, was published in Enigmatic Mirror Press’s anthology Mysterion: Rediscovering the Mysteries of the Christian Faith in August 2016. Buy the anthology here: http://www.mysterionanthology.com  (also includes free sneak peeks at all the stories)

The Mind Has Mountains, a fantasy story about refugees, trauma, mental illness and healing, was published in The Mythic Circle in 2013. Buy the magazine here: http://mythsoc.org/mythic-circle/mythic-circle-35.htm

My website has moved to www.joannamichalhoyt.com   Hope to see you there!

Joanna Michal Hoyt
I'm an autodidact, full-time volunteer at a nonprofit/sustainable farm/intentional community, and part-time writer. My essays and short stories explore the varied questions that shape my daily work. Some of these are broad questions: How can we become aware of the impact our lives, including our economic lives, have on other people—and how can we make that impact more positive? How do we see ourselves in people from very different backgrounds—and do those resemblances move us to sympathy or to dismay? How do we live constructively with fear? Others are quite specific: How can people grow food cheaply and sustainably as the climate gets weirder? How did US immigration policy get this way? What would happen if...? (More information coming soon. This site is brand new and I am still figuring out what to add.)